5 Beautiful Species of Wrasse for the Aquarium

5 Beautiful Species of Wrasse for the Aquarium

If you’re setting up your aquarium and looking for the right fish to stock it with, you’ll almost inevitably stumble upon the scientific family Labridae: the wrasses. There are over 600 species of wrasse out there and a fair few of them are popular in the aquarium trade. It’s not hard to see why: their bright colors and sometimes showy finnage are real eyecatchers.

Keep reading for a list of 5 of our own favorite wrasse fish for the aquarium and the basics of their care.

Commonly known as both the Melanurus wrasse or the tail-spot wrasse, Halichoeres melanurus is a very colorful fish that’s pretty hard to overlook in the aquarium store. Which is a good thing, as this is a great wrasse for your saltwater system!

At a maximum size of around 5”, the Melanurus wrasse won’t outgrow your aquarium like many of its bigger cousins will. It’s a relatively hardy fish that can be kept by beginners and it’s not shy, meaning you’ll be able to enjoy watching it zip around the tank.Melanurus wrasses are tentatively reef safe and because they have such a big appetite for creepy crawlies they can actually help to keep populations of annoying aquatic parasites and pests under control. Do keep in mind that these are jumpers, so a lidless aquarium is not going to work for them! 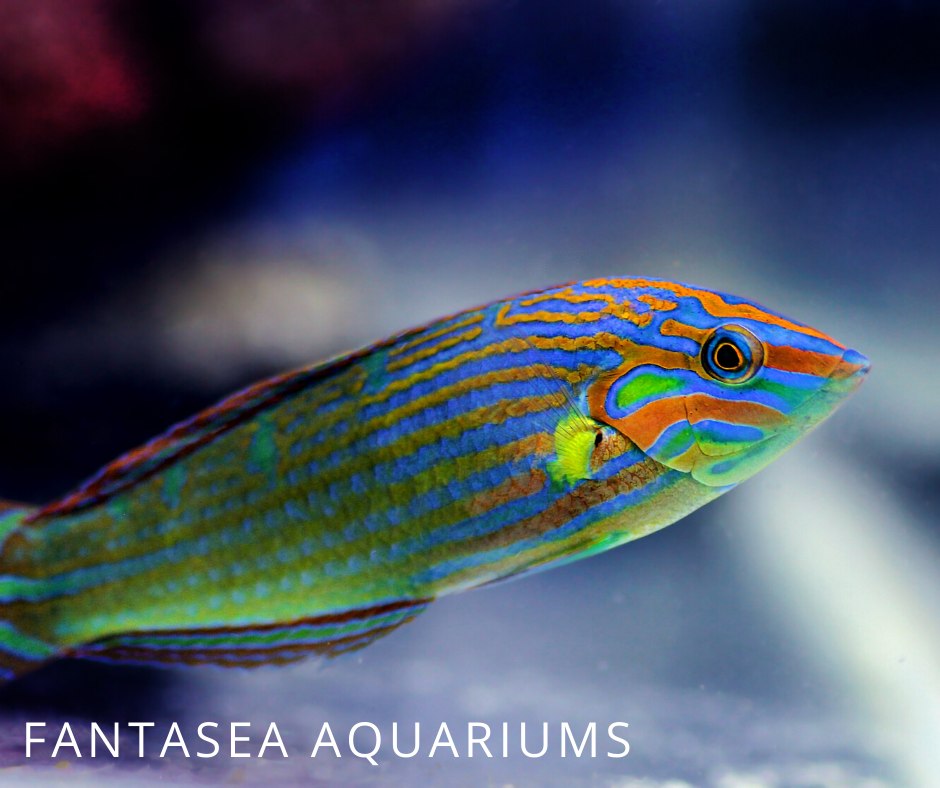 The genus Pseudocheilinus contains a number of wrasses that work very well in the aquarium, many named after their patterns: There’s the eight lined wrasse, the six lined wrasse and the four lined wrasse, among others.

Our personal favorite is the six line wrasse, a colorful little fish in shades of orange, yellow and bright blue. At a maximum size of around 4” this species is perfect for aquariums of 30 gallons and up. It’s reef safe and hardy, its typical wrasse diet of small invertebrates making it the perfect candidate to pick off annoying pyramidellid snails and other pests.

The one downside of six line wrasses is their temper. They are not suitable to keep with slow-moving tankmates because these are easily outcompeted or even bullied to death. To help prevent issues, make your six line wrasse the last fish you introduce to your aquarium so it can’t establish a territorium before the other species and become protective of it.

Difficulty level: Intermediate (due to its aggression level) 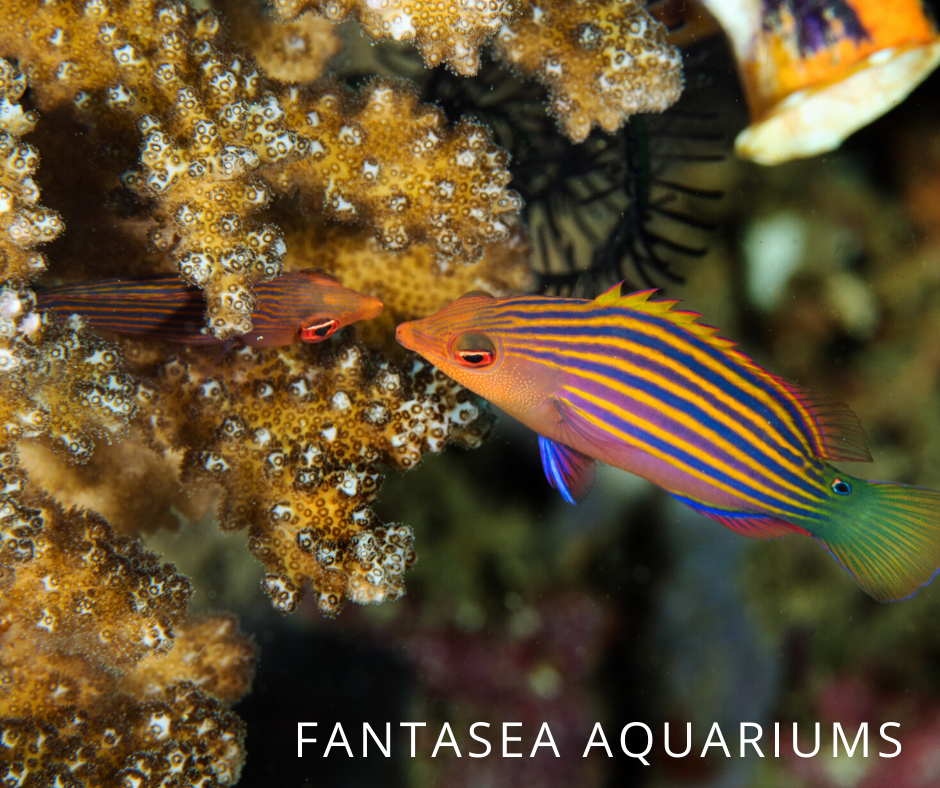 The ornate wrasse from the Indo-Pacific region is definitely one fish that honors its name. The genus Halichoeres contains a few wrasses that are kept in the aquarium, including one discussed below, almost all of which are very flashy.

The ornate wrasse grows to a maximum size of around 7”. It’s one of the more peaceful wrasses and it will leave even most other docile wrasses alone. It’s also reef safe, although you might want to avoid keeping it with smaller shrimp species.

Note that outside of the aquarium hobby (in diving, for example), ornate wrasse does not always refer to Halichoeres ornatissimus, the fish we’re discussing here. It’s also a common name for Thalassoma pavo, which does occur in the aquarium trade as well but is larger and requires lower temperatures.

Often the most beautiful fish always seem to be disappointingly difficult to keep, but luckily this doesn’t apply to the longfin fairy wrasse at all. If you’ve never kept wrasses before, this is a great species to start with: it’s peaceful, reef safe and suitable for smaller aquariums at a size of only 3”.

Longfin fairy wrasses have big appetites and you’ll see them actively scout the aquarium in search of copepods and other tasty morsels. Be sure to feed yours multiple times daily to support its appetite, as our aquariums usually don’t contain enough critters to maintain a longfin fairy wrasse. 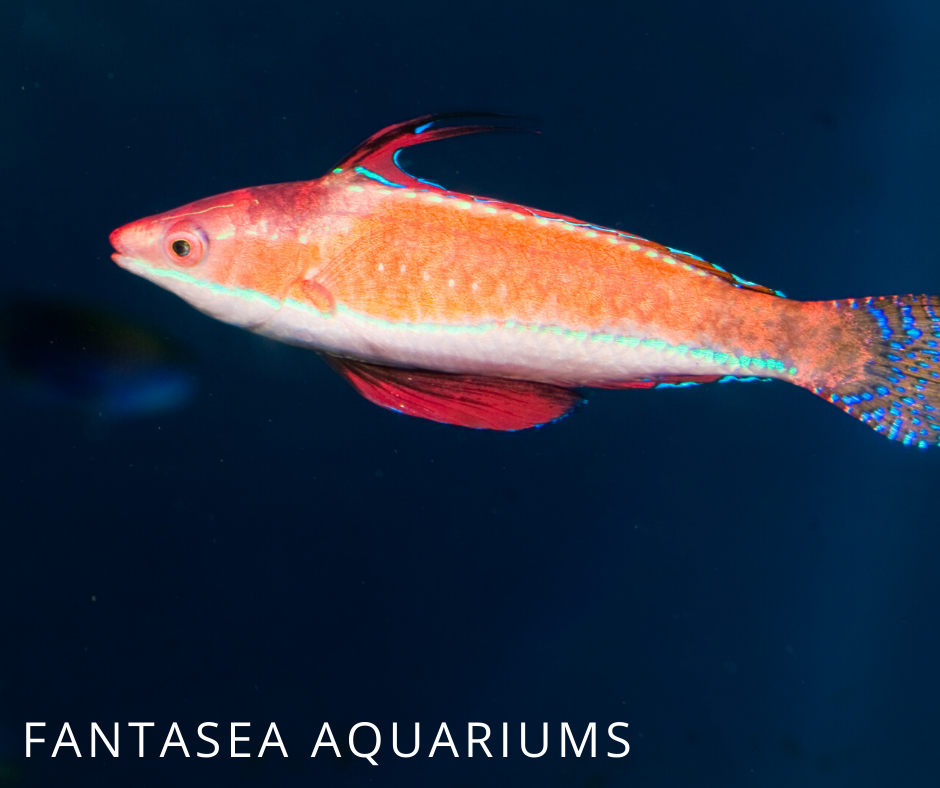 Like the previously mentioned ornate wrasse, the red-lined wrasse is a beautifully colored member of the Halichoeres genus. This orange-red and blue striped species is also referred to as the two spot wrasse, as it has two large eye spots (ocelli) on the dorsal fin meant to confuse and intimidate predators.

Naturally found in the western Pacific Ocean, the red-lined wrasse is a reef dweller that grows to a maximum size of around 4.5”, meaning it doesn’t need a very large aquarium to thrive. Do be sure to add a sand bed, since like many wrasses this species loves to burrow.

The red-lined wrasse is not considered 100% reef safe, as it might disturb corals. It also has a taste for pretty much any object that fits into its mouth, meaning it’s not guaranteed to leave smaller invertebrates alone. Other than that it’s peaceful enough.

There are many beautiful wrasse species out there in the aquarium trade and this list doesn’t even begin to cover all of them.

If you’re not sure how to go about choosing the right fish to go with your wrasses or which wrasse suits your aquarium in the first place, why not leave things to us? FantaSEA designs, builds and maintains aquariums so all you have to do is enjoy your tank. 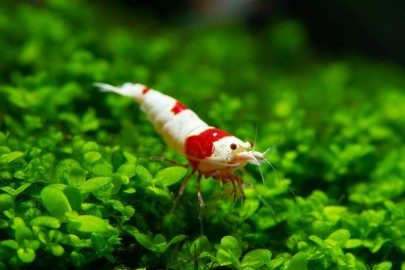 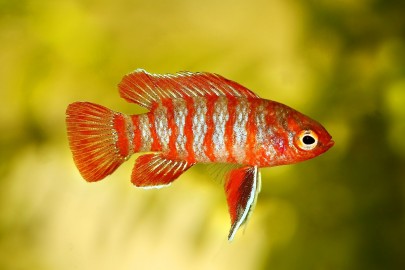