If you’re a long-time reader of the FantaSEA Aquarium blog, you’re probably aware of our love for wrasses like the Melanurus wrasse and six line wrasse. Today, let’s put another one of these fascinating aquarium fish in the spotlight: the blue streak cleaner wrasse, scientifically known as Labroides dimidiatus.

Keep reading for everything you need to know about blue streak cleaner wrasse care and keeping one in your home aquarium.

The blue streak cleaner wrasse’s common name gives a lot away: this species features bright blue coloration. A black horizontal band runs across the side from the nose to the tail, where it widens, although the exact width of this band varies based on the subspecies.

Blue streak cleaner wrasses can reach a maximum size of around 5.5”, although they usually stay a bit smaller. 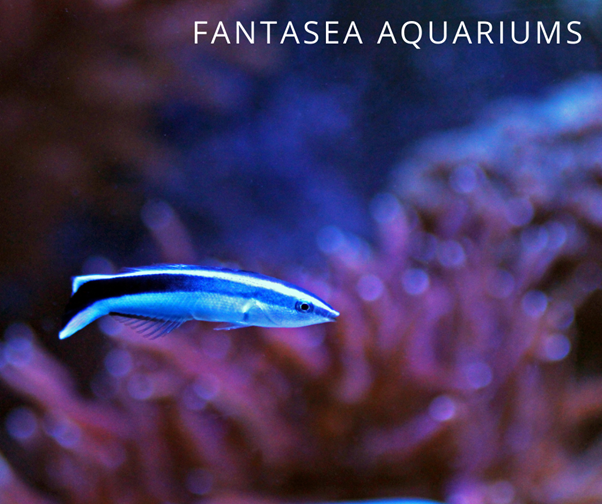 The blue streak cleaner wrasse is generally not considered to be a species suitable for beginning aquarists, although this has more to do with their feeding requirements than the aquarium itself.

Tank size is their only real requirement: although they don’t grow too large, it’s a good idea to provide a sizeable tank. This is an active fish that likes plenty of swimming room as well as lots of tankmates, which is just not possible in a small aquarium. We’d recommend 110 gallons as a minimum, but this is definitely a case of ‘the bigger, the better’.

This is not an aggressive or territorial species, nor does it have much to fear from other fish due to its talent for cleaning. Even most larger, predatory species will mostly leave it alone. The only issue is other wrasses, including if you combine two male blue streak cleaner wrasses. They tend to get territorial with species that look too much like themselves.

If you’d like to keep multiple blue streak cleaner wrasses, that’s an option, although keep in mind that it already tends to be difficult enough to keep one of them well-fed. If you do decide to go for it, a pair or harem is the best option. Don’t worry if you can’t find a male: as with clownfish, the dominant female will turn into a male if one is lacking. 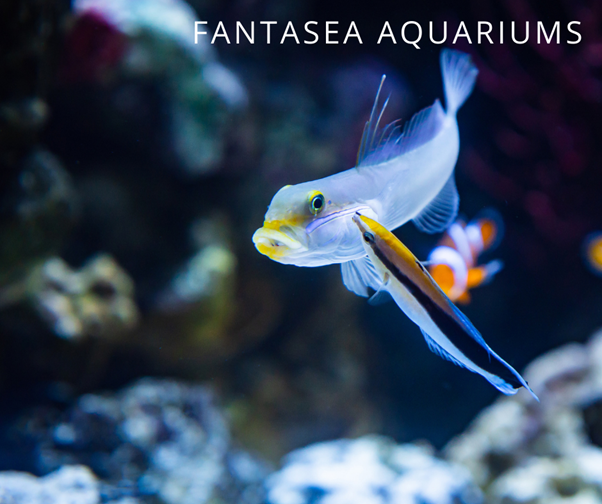 Okay, so what are these difficulties with feeding that we’ve been alluding to? Well, this species isn’t called a ‘cleaner wrasse’ for nothing. Both in the wild and in the aquarium, a blue streak cleaner wrasse will set up a cleaning station, which will be visited by an array of other fish species.

At the wrasse’s station, the clients receive a full cleaning, being relieved of anything from parasites to dead scales. The wrasses are not afraid to get up close and personal while doing their cleaning work, often swimming straight into the mouths of predatory species to pick off any tasty bits they can find.

All of the above is pretty cool if you ask us, but it does tend to cause issues in the aquarium. The blue streak cleaner wrasse’s diet is so specific that it’s extremely hard and sometimes even impossible to get them to eat any ‘normal’ aquarium fish foods. This causes them to have to rely on the bits they can pick off their tankmates, but since that’s often just not enough, many of these wrasses sadly tend to starve to death within a few weeks or months.

So what can you do? Well, although buying a blue streak cleaner wrasse that’s accepting commercial fish foods at the aquarium store isn’t a guarantee that it will also accept them at home, it’s a start. Offer small quantities of meaty foods like vitamin enriched (thawed) frozen or live foods as well as chopped small shrimp and squid.

Some aquarium fish, including the blue streak cleaner wrasse, are not suitable for the beginning aquarist. That’s where we come in! FantaSEA Aquariums is here to design, build and maintain your aquarium, offering advice and making sure your fish and corals do well in the long run. You can contact us here with your ideas.