If you think moray eels, you’re probably thinking of big fish for even bigger aquariums. With a maximum size of 2 ft, the banana eel is still considered a small species. At 5 ft, zebra eels are pretty average. But did you know there’s one exception? The golden dwarf moray eel reaches a maximum of only around 12”, although that still doesn’t mean it’s a fish for everyone.

Keep reading for everything you need to know about golden dwarf moray eel care!

The golden dwarf moray eel is naturally found in the Indo-Pacific and is especially common around Hawaii, where it can apparently easily be spotted while diving.

Although some sources state that this species won’t grow larger than 10”, aquarists report their golden dwarf morays actually maxing out at about 12”. Still very small for a moray eel! Despite its size, this fish is still very much a moray. You’ll know it when you see one sticking its head out of its lair with its mouth open, just like its larger cousins.

The species ranges from pale to deep yellow in color, with some sporting brown spots along the side of the body. The eyes are pale blue and characterized by striking, vertical pupils, almost like a cat. Because they’re mostly nocturnal, don’t expect to see yours about much during the day.

Although the golden dwarf moray eel stays small, it’s generally not recommended to try to keep one in a very small aquarium. 55 gallons or up is a better idea, as these guys are messy eaters that can be too much of a strain on the system in smaller set-ups.

Provide plenty of hiding places for a happy moray: live rock works fine, but if you don’t have any on hand, standard PVC pipes are also great. A sandy substrate will probably be appreciated.

Tip: Although all moray eels (and many fish in general) are known for their escape artistry, golden dwarf moray eels appear to take the concept to the extreme. If you don’t want to lose yours, make absolutely sure even the tiniest holes are covered.

If you’d like to keep a golden dwarf moray eel, keep in mind that although they’re small, they’re still morays that sport an impressive double set of teeth. This means that your hand shouldn’t come anywhere near it (a bite can cause infection), and also that adding one to your tank does put your other livestock at risk. Aquarists’ reports vary, but crustaceans and even small bottom-feeding fish might be in the danger zone.

If you do want to keep your golden dwarf moray eel in a mixed aquarium, choosing quick, larger tankmates is probably the way to go. Avoid shrimp, crabs and vulnerable species like firefish and jawfish.

These morays are usually not too difficult to get to eat, although it can help to target feed them to avoid their tankmates from getting to the food first. Use long forceps or a stick – not your hands, as the species exactly have great aim when it comes to taking food.

You can feed your golden dwarf moray eel using meaty foods like silversides, chopped squid, ghost shrimp and more. They don’t need food often, so you can feed yours a few chunks once or twice a week. If you see it being unusually active and spending more time outside its lair during the day, that’s a good indication it’s hungry and ready to have a bite.

A beautiful aquarium with a spectacular golden dwarf moray eel is quite a sight to see, but it does require some specialist knowledge to make sure your moray thrives. No time to become an aquarium expert? No worries, we already did the work, so we can design, set up and maintain your aquarium for you. Contact us here with your ideas! 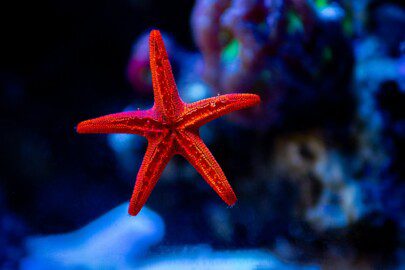 How Long Do Clownfish Live? | All About Clownfish Lifespan Probably the most popular...
learn more