Are you an experienced aquarist looking to branch out into a more high-stakes type of fishkeeping? Moray eels are not for beginners, nor are they for the faint of heart – two pairs of jaws full of needle-sharp teeth are not something you want to get too close to your hands – but they are fascinating and some are actually suitable for life in an aquarium.

Let’s go into 6 of our favorite aquarium eel species!

I don’t think we have to clarify where this striped fish got its name! The only member in the monotypic genus Gymnomuraena, the zebra eel is naturally found in the Indo-Pacific. It grows to a maximum size of around 5 feet, meaning it’s not suitable for smaller tanks, although it can do well in set-ups of 200-250 gallons or up.

Provide your moray eel with plenty of hiding places, as they are ambush hunters that naturally use their sense of smell to detect prey. This means they like spending much of their time holed up, waiting for the right time to strike.

You can read more about this species in the full zebra eel care guide.

The spectacular banana moray eel is one of the most sought-after morays in the aquarium hobby, and it’s not difficult to see why. This is not a naturally occurring species, but rather, a selectively bred color morph of the goldentail moray eel (Gymnothorax miliaris – pictured below). It lends its name from its almost fully yellow body, which is mottled with dark brown spots, just like – you guessed it –  a banana.

Banana eels are on the smaller side in terms of morays, growing to a maximum size of around 2 feet. This makes them suitable for aquariums of 125 gallons or up, but don’t underestimate them: their teeth are still razor-sharp and their waste output can be very taxing on a fish tank set-up.

You can read more about this species in the full banana eel care guide.

Another eel popularity contest winner is the snowflake moray eel, which is also known as the clouded moray. Naturally found in the Indo-Pacific, it’s one of the most commonly kept aquarium eels. This might have something to do with their relatively relaxed attitude: although you should be careful with any moray species, these guys are known for being a bit more laid-back than most of their cousins. They rarely grow over 3 feet and are often recommended for aquariums of 55 gallons or up, although we’d personally keep them in something a little larger just in case.

Keep in mind that moray eels are escape artists. To prevent a ‘carpet surfing’ session, be sure to always use a tight-fitting lid on your tank.

Got a couple of spare dollars lying around? The golden dwarf moray eel is sought-after due to its small size, but it’s not always easy to find one and can fetch high prices.

Golden dwarf morays grow to a maximum size of around a foot, although you shouldn’t think that their limited size makes them suitable to keep in a peaceful aquarium with small tankmates: they’ll still happily gobble up anything from shrimp to small gobies, as well as anything else that gets too close.

An aquarium of 55 gallons or larger is probably suitable for keeping a golden dwarf moray eel, although bigger is almost always better in this hobby!

We’ve arrived at what’s undoubtedly the most funky-looking species on this list! The coveted dragon moray eel is even more expensive than the previously discussed golden dwarf moray tends to be, and it’s not a species that makes its way into the aquarium hobby all too often.

Like most other species on this list, the dragon moray (also known as the leopard moray eel) is naturally found in the Indo-Pacific, where it inhabits shallow to medium-depth reefs and hunts at night. It grows to around 3 feet in length and is suitable for aquariums of 150 gallons and up. Be careful when it comes to tankmates, because unlike some other eels that have more of a taste for invertebrates, this one’s a specialized fish eater.

Like the previously mentioned dragon moray eel, the honeycomb moray is sometimes also known under the common name of leopard eel. That’s why scientific names are handy to make sure we all know what fish we’re talking about!

If you’re interested in keeping this attractively patterned species, we hope you’ve got some room to spare. They’re the biggest species on this list: although most specimens stay smaller, they have the potential to reach up to a whopping 10 feet in length. Count on yours growing up to 6 feet at least, meaning you’ll need an aquarium of at least 180 gallons, though preferably considerably larger.

Did you know? Maybe the most amazing moray species offered in the trade is the ribbon eel, Rhinomuraena quaesita. It’s not discussed on this list, though, because these guys unfortunately are extremely prone to starving to death in captivity. They’re best left to professional aquarists.

Although the idea of keeping a fascinating and aggressive species like a moray eel in the aquarium is very attractive, it’s important to remember that these aren’t the easiest fish out there.

If you’re not sure you’ve got what it takes, we can help! FantaSEA Aquariums can design, build and maintain your moray eel aquarium – or any aquarium, for that matter – for you. Contact us here to brighten up your home or office with some underwater life. 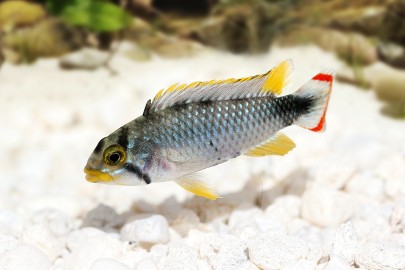 Keeping Agassiz's Dwarf Cichlid Looking to get into cichlid keeping? Why not start with...
learn more

If you’ve been following the FantaSEA blog for a while, you’ll know that there...
learn more