If you’re looking for interesting invertebrates to add to your aquarium, starfish may have caught your eye. They’re such a typical underwater inhabitant, but at the same time so alien and unusual that it’s easy to understand why they fascinate aquarists around the world. But beware: the majority of starfish is either not reef-safe or not suitable for aquarium life at all.

We could tell you about all the amazingly colorful starfish to be found in your local aquarium store, but what’s the use if your sea star would just starve within a few months or worse, eat your reef? That’s why we’ve compiled this list of 5 reef safe starfish, all of which actually have a chance of survival!

Okay, we’re starting off here by cheating a little bit, because brittle starfish are actually not true sea stars. Still, with five arms and a central body, we’d say they’re pretty close. These echinoderms are members of the class Ophiuroidea and are characterized by their long, spindly arms. Their appearance is a little icky to some, but they really do make a good addition to some types of aquariums. They’re great for your cleaning crew and very good at disposing of detritus and leftover fish food.

Despite their name, these stars aren’t nearly as brittle as some other starfish: they adapt reasonably well to life in a fish tank. They’re pretty easy to keep and they don’t bother your livestock and corals as some other starfish species do. You’ll see yours coming out mostly at night to scavenge, although you can also try target feeding small pieces of fish if you can locate your starfish.

There are quite a bunch of brittle starfish species, some of which get quite large. If you don’t want yours to outgrow your aquarium, you could see if you can acquire some mini brittle stars. These don’t tend to grow larger than 2”.

Did you know? One problem many aquarists run into with starfish is that they need very careful acclimation to the aquarium. They don’t respond well to quickly changing water conditions.

Serpent starfish are very similar to the aforementioned brittle star. Both are members of the Ophiuroidea and don’t differ much in terms of looks. Some sources consider the two names synonyms, but in the aquarium hobby at least, “serpent starfish” tends to refer to Ophiuroidea with smooth legs, while “brittle starfish” have protrusions and tiny spikes on their appendages.

Although there are many species of serpent starfish, one we particularly like for the aquarium is the red serpent starfish (Ophioderma squamosissimus). These guys can get pretty big, but most aquarists we’ve spoken to report that theirs leave their livestock and reef alone, especially when well-fed.

Their funky looks, bright color and detritus eating talents definitely makes this one worth considering if you’d like to keep a starfish. They’re also not as difficult to keep alive as some other species, although they do need careful acclimation to the aquarium.

Did you know? Although starfish are often accused of snatching fish, it’s also important to consider the reverse. Those long legs can seem irresistible to some fish species, so it’s a good idea to avoid overly voracious specimens like pufferfish.

Aside from the Ophiudoidea, one of the main groups of starfish species commonly kept in aquariums are from the genus Fromia. The red starfish or Fromia milleporella is one of the species you might come across in your local aquarium store. This sea star (which is also known as the black spotted starfish) is pretty neat to look at with its bright reddish-orange color, and its appearance isn’t nearly as off-putting as that of brittle and serpent stars!

All of the above is great, but any seasoned marine aquarist will know there’s always a catch. In this case, it’s the fact that Fromia milleporella is only suitable for large and mature aquariums. This is because its diet appears to consist of algae, biofilm and sponges and it’s reported to be difficult to get these guys to accept supplemental feedings. At least the aforementioned does mean that your Fromia won’t be interested in eating your livestock, making it reef-safe.

The species is also sensitive to changes in water parameters, meaning you’ll have to acclimate it very carefully and take it slow while doing water changes.

Did you know? As you may have realized by now, the science is a little behind when it comes to many starfish species. We aren’t always entirely sure what they eat and even their naming and classification can be incorrect!

This genus of starfish is reported to be pretty well-suited to aquarium life, with many aquarists saying theirs is still going strong a good while after purchasing it. They’re also reef safe, feeding mostly on biofilm, algae and sponges. Our personal favorite would have to be Echinaster sentus (often sold simply as ‘common starfish’), with its colorful orange bumps.

As long as your aquarium is reasonably large (50+ gallons) and mature, with plenty of live rock present for biofilm to grow on, you should be able to keep an Echinaster. You can supplement its diet using normal fish foods, but it can be a challenge to get the food to the starfish without any tankmates snatching it up.

Did you know? As you can see, the Echinaster starfish in the image below is missing part of one of its legs. Fascinatingly, starfish are usually able to regenerate lost appendages! In fact, a brand new sea star actually sprouts from a lost leg sometimes.

Let’s close out the list with another Fromia! Although similar to the black spotted starfish, the difference here is in the black-tipped appendages and slightly different pattern. The maximum diameter for this one is about 4”.

Other than that, it’s all pretty much the same story: you’ll need a large and mature aquarium and the starfish must be acclimated very slowly. Avoid water parameter swings and definitely stay away from any copper-based medications.

A note on Asterina starfish

It’s not uncommon to end up with a whole bunch of starfish in your aquarium without ever setting out to buy them! The genus Asterina is a common aquarium hitchhiker and hardier than any of the other species on this list. The reason we didn’t include them is because of the fact that, despite some being great detritus feeders, they can reproduce so quickly that they’re actually usually seen as more of a nuisance.

The Asterina starfish found in the aquarium are small (under an inch in length), but they can be problematic. These guys eat anything (seriously, they even eat each other) and aren’t afraid of munching on your corals if other foods are in short supply. That’s why some aquarists actually use harlequin shrimp to get rid of what they consider infestations.

As mentioned in the introduction, there are quite a few starfish for sale in the aquarium hobby that you might want to steer clear of. We wouldn’t write most of them off entirely, but unless you know exactly what you’re doing, buying one tends to be a recipe for disappointment.

Looking to add a starfish to your reef? All of the 5 species discussed here are reef safe and have a fighting chance (as opposed to some others, which are almost guaranteed to die). If you’re a beginner, our top recommendation would be a few mini brittle stars. These are pretty hardy and make a great addition to your clean-up crew without growing overly large.

If you’re dreaming of a beautiful reef aquarium for your home and office, give us a shout here. FantaSEA Aquarium is here to design, set up and maintain every type of fish tank you can think of!

How to Make Saltwater | In 5 Easy Steps

If you’re just starting your first saltwater aquarium, you might be wondering how to...
learn more 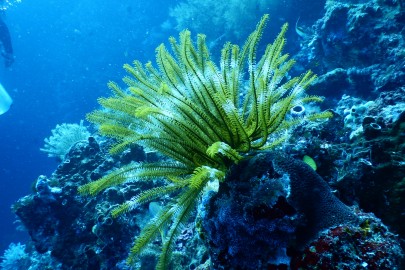 Setting Up Your Saltwater Aquarium

Setting Up Your Saltwater Aquarium Dipping your toes in the aquarium hobby? Starting that...
learn more