Why hello there! Long-time aquarists will know that hermit crabs are often colorful, but Ciliopagurus strigatus really takes the cake. Better known as the Halloween hermit crab, this popular aquarium invertebrate’s red and orange stripes are pretty difficult to overlook.

Let’s go into everything you need to know about the Halloween hermit crab and keeping this species in your home aquarium!

It’s not difficult to see where the Halloween hermit crab got its common name. Those dark red and orange striped legs really are rather festive! The species sports a white back shield and prefers cone shells as its home.

At a maximum length of 2″, this is one of the larger reef-safe hermit crabs.

This hermit crab is naturally found in the Indo-Pacific, in a very wide range all the way from the Red Sea to the remotest islands in the Southern Pacific, like the Marquesas. Here, it inhabits shallow waters in the low intertidal zone down to a maximum of around 65ft.

Did you know? The Halloween hermit crab is only one of four very similar species in what is called the strigatus complex. The other hermits, which are quite difficult to tell apart from each other, are Ciliopagarus tricolor, vakovako and galzini.

You don’t need a large aquarium if you’d like to keep a Halloween hermit crab: they do well in nano tanks from 15 gallons. The species is not fussy about its environment, although it’s important to always make sure the aquarium is fully cycled before introducing any livestock. A good layer of substrate for the crab to dig around in is definitely recommended.

You should also scatter plenty of shells of different sizes for your Halloween hermit to occupy around the tank. Otherwise, it can end up hassling other hermits and even kill snails to take their homes. It’s best to offer cone snail shells (genus Conus), as these crabs’ flattened bodies don’t really fit into other types of conches.

Did you know? The Halloween hermit crab molts regularly. Invertebrates are vulnerable during molting time, so you may not see yours for a few days, as it will prefer to stay in hiding. When it returns, it may have changed into a new, larger shell.

Compatibility for this hermit crab species is somewhat debated. Some aquarists report theirs being absolutely peaceful, while others mention bottom dwellers (especially snails) being harassed. Still, you should be able to combine this species with most fish.

It’s generally not recommended to keep multiple Halloween hermit crabs in the same aquarium unless the tank is very large, as they can end up disputing over shells.

Although this hermit is considered reef-safe and won’t eat corals, its size does mean that it can disturb and knock them over. Although the species prefers open areas in the aquarium, it can still be a good idea to glue small corals down to prevent issues.

In its natural habitat, the Halloween hermit crab is an omnivorous reef scavenger that will take advantage of any edible morsel it comes across. It will eat live and dead small creatures, detritus and algae, making it a great addition to your aquarium’s cleaning crew! In particular, these hermits consume green algae and cyanobacteria, which comes in handy to keep your tank looking its best.

Supplemental feedings are needed to keep your Halloween hermit crab well-fed. Remember, they do hunt live prey if they get hungry, so make sure yours has plenty of food available to prevent it from going after small tankmates!

You can offer a variety of sinking food options like algae tablets, meaty frozen foods and more.

As with many similar invertebrates, the Halloween hermit crab is not a species you’ll be able to breed in the aquarium. We haven’t found any successful breeding reports, in any case!

If you keep multiple, they may mate and the female can produce thousands of eggs, which she keeps with her in her shell until they hatch. That’s where things tend to go south, unfortunately: the offspring passes through a planktonic larval phase, which makes it very difficult to raise them. They may also need differing salinities.

Whether you’ve got a huge reef tank or a small nano aquarium, the Halloween hermit crab will make a great addition. It adds a pop of color and helps clean-up leftover fish food and other detritus.

Dreaming of a beautiful aquarium full of colorful and unusual creatures like this hermit? Give us a shout! FantaSEA Aquarium designs, builds and maintains aquariums for clients throughout Maryland, Virginia, Delaware, Washington D.C. and beyond.

7 types of coral for beginning reef keepers If you’re just starting out in...
learn more 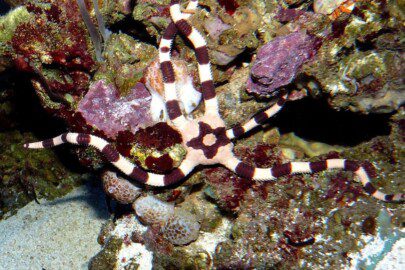 Looking to add a starfish to your aquarium? Funnily enough, your best option isn't...
learn more