If you’re an avid marine fishkeeper, you’ll know that live rock can contain a wide range of critters that might show their face over time. Some of these hitchhikers are considered unwanted visitors, while others are seen as neutral or even beneficial to your aquatic ecosystem. We get calls all the time asking about uninvited guests showing up in aquariums, but the most common one might be the species we’re discussing today: Stomatella snails.

Let’s clear this up once and for all! Keep reading for everything you need to know about what Stomatella snails are and whether they’re considered an aquarium friend or foe!

What is a Stomatella snail?

Stomatella is a genus of marine gastropods, snails to be exact. They’re small to medium in size, although the ones that show up in aquariums are generally on the smaller side, with a maximum size of around 1”. You’ll recognize them from their flat shell that only seems to cover half of the body and overall unassuming appearance. They also have antennae.

Stomatella snails are generally a drab brownish color, possibly speckled, although they can also pop up in other shades. They’re surprisingly quick for a snail, zooming around the glass and decorations scraping off algae and microorganisms.

Why are there Stomatella snails in my tank?

Some aquarium stores stock select species of Stomatella snails. That being said, most aquarists don’t go out to buy these gastropods: they just show up.

Due to their often neutral colors and small size, these snails can end up being pretty well-camouflaged, stowed away in the crevices of the live rock you bring home. Once they get comfy, they pop out on the hunt for tasty algae, leaving you scratching your head wondering if they should stay or go

Some aquarium hitchhikers are the source of some debate, or their harmfulness depends on your goals with your tank. Stomatella snails are not among them. The aquarium community tends to resoundingly agree that they’re absolutely welcome visitors! In fact, it’s not uncommon to see folks asking for them on aquarium forums and in Facebook groups, as they’re desirable but not all aquarium stores carry them.

The reason aquarists tend to be happy to see Stomatella snails in their aquarium is that they’re considered valuable members of the janitorial team. They’re 100% reef safe and help keep the tank tidy by feeding on algae, microfilm and leftover food.

If you found one or multiple Stomatella snails in your aquarium and have now been reassured that they’re not going to cause problems, you might be wondering how to make sure they stay alive. Luckily, aside from keeping the water quality in your aquarium high, there isn’t much you need to do. Do keep in mind that some fish and invertebrate species have an appetite for snails, including the popular six line wrasse.

If you’re among the folks who aren’t too obsessive about keeping their aquarium absolutely spotless, your Stomatella snails will be fine. They feed on algae and are perfectly capable of finding their own food. If your tank tends to be relatively algae-free, however, you can regularly offer some nori sheets to make sure the snails don’t go hungry.

Yep, these snails do breed in the aquarium, but they’re unlikely to become a nuisance like some other species do. If you have too many, you can usually find someone to take them off your hands without much trouble, be it a fellow aquarist or even your local aquarium store.

If you’re around to see the Stomatella breeding process, it can be quite a sight. They all spawn at the same time, making their way to the top of the aquarium and releasing the necessary components to make tiny snails. This can result in temporarily cloudy aquarium water. In some cases, that’s where it ends: fish and invertebrates alike won’t say no to a sudden feast of eggs, so they don’t always make it.

If fertilized Stomatella snail eggs do survive, you’ll see them stuck near the top of the aquarium. Soon, these tiny dots will start taking their first ‘steps’ zooming around the aquarium. Voilà, brand new snails.

It can be easy to get spooked by the appearance of unknown critters like a Stomatella snail in the aquarium, but they’re not always bad news! If you’d like professional help with your aquarium, we can help: FantaSEA designs, builds and maintains aquariums in homes and professional environments alike. Contact us here with your ideas and we’ll discuss setting up your dream tank. 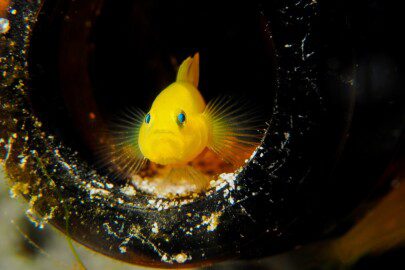 7 Beautiful Gobies for the Marine Aquarium

If you’ve been an aquarium enthusiast for a while, you’ve probably kept some type...
learn more