Even if you’re not an aquarist, chances are you’ve seen or heard of marine angelfish. The family Pomacanthidae, which contains a total of 86 species, is among the most popular when it comes to reef fish for the aquarium! It’s also one of the more challenging to breed, with the majority still being harvested from the wild.

Let’s talk angelfish, aquaculture and the advances being made in raising these fish in captivity.

The marine aquarium hobby is a huge worldwide trade. In the United States alone, 2.5 million households owned a saltwater aquarium in 2018, with an average of 7.5 fish (American Pet Products Association, 2018). That’s 18.75 million saltwater fish just in the US, and a large percentage of them are marine angelfish. Dwarf angels are especially popular, making up 77% of all angelfish in the marine trade (Baensch, 2017).

Compared to the freshwater aquarium trade, where many of the most popular species are aquacultured in captivity on a huge scale, the saltwater hobby lags behind. Despite advances in aquaculturing techniques, the majority of marine aquarium fish species are still wild caught. The marine ornamental reef fish trade forms part of the livelihood for many families around the globe, but there are plenty of questions about the sustainability of the practice.

Although there is still some discussion about how much harvesting of reef fish for the aquarium trade actually impacts wild populations, the trade is being regulated more and more strictly. As a result, the focus on aquacultured (captive bred) fish has increased and aquarists are becoming more environmentally conscious. A good thing, if you ask us: it definitely seems preferable to leave wild reefs alone, and aquacultured fish often adapt much better to aquarium life than wild caught ones do. Bonus points if we can help local fishermen make the switch from harvesting to aquaculturing!

There’s just one problem: aquaculturing many marine species, including the many wildly popular angelfish, is not an easy feat. Researchers are still working on being able to raise these fish on a commercial scale, challenged by how difficult it is to find the right food for their teeny tiny larvae. They’re getting there, though, with more and more non-wild caught angelfish now available in larger and larger numbers.

So if it’s such a challenge to raise marine reef fish like angelfish, how do they do it? Let’s have a look at the aquaculturing of dwarf angels (genus Centropyge) first, as they’re by far the most popular in the aquarium hobby. Centropyge loriculus (the flame pygmy angelfish) and Centropyge bispinosa (the coral beauty angelfish) are particularly common.

According to Baensch (2017), thirteen out of the thirty-five dwarf angelfish have been successfully bred in captivity so far. It all starts with spawning, which is actually not an uncommon event: many dwarf angelfish species spawn readily in the aquarium. The challenge begins after the eggs hatch.

Dwarf angelfish larvae are small – not even 2mm after hatching. And they’re particular, especially about their food. Finding the right diet to raise them on still gives aquaculture groups headaches, because the species can’t be raised on rotifers like many other marine fish. Luckily, they’ve come a long way using baby copepods.

The larvae are reared in aerated special breeding tanks that are carefully maintained at the correct temperature, salinity and water parameters. Even lighting is important, with very small larvae needing lots of it but then becoming increasingly sensitive. After 40-90 days, depending on the species, the larvae finally metamorphose into the angelfish us aquarists know and love. With a bit of luck, that is; mortality rates are still high. Little by little, aquaculture methods are improved to make sure more fry survive.

Did you know? Like many other marine species, dwarf angelfish occur in harems. If a dominant male is lacking, a dominant female will change sex and mate with the other females.

Although the focus really appears to be on dwarf angelfish, a few larger species have been successfully raised in captivity as well. The semicircle angelfish (Pomacanthus semicirculatus) is one of the success stories, with the first spawning and raising of larvae occurring in 2006 (Leu, Liou, Wang, Yang & Meng, 2009). The blue-striped angelfish (Chaetodontoplus septentrionalis) followed (Leu, Sune & Meng, 2013), as did the bellus angelfish (Genicanthus bellus) in 2017. 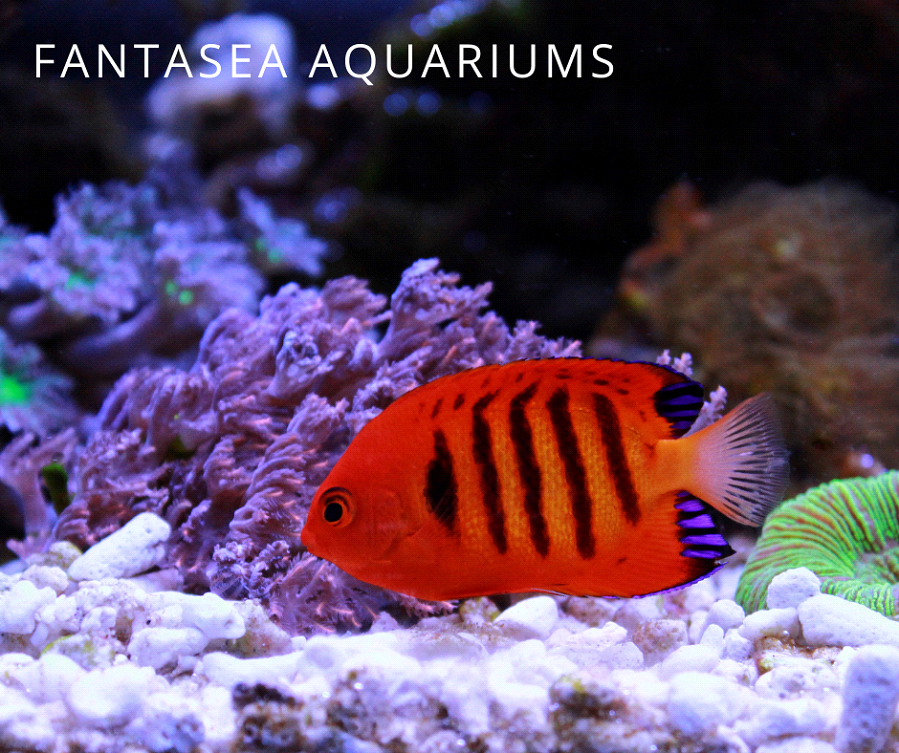 Breeding angelfish in the home aquarium

By now, the angelfish enthusiasts among us are probably dying to know the answer to one question: can I do this at home?!

Is it possible? Yes, we’ve encountered one or two successful breeding reports for angelfish: the coral beauty angelfish bred by Kathy Leahy, for example, or the bellus angelfish by Vossen Aquatics. Is it something for the casual aquarist to attempt? Not really, unfortunately. All of the people who managed to raise a few angels approached it pretty seriously, with resources not all of us have access to.

If you’re still interested in knowing more about what it takes, you can consider checking out Frank Baensch’ excellent resources. Or try your hand at breeding an easier reef fish species instead. Raising clownfish at home, for example, is a lot more realistic!

Sustainable aquaculturing of popular marine reef fish species like angelfish is still a challenge, but improvements and new breakthroughs are made on the regular. We, for one, are excitedly following the new success stories that pop up yearly. Hopefully we can soon supply aquacultured specimens of all angelfish species to our clients.

If you’re thinking about a reef aquarium for your home or office but feel you lack the time or skills, FantaSEA Aquariums can help. Contact us here with your ideas so we can design, build and/or maintain your tank for you!