5 Crabs for The Saltwater Aquarium

The world of saltwater fishkeeping is filled with weird, wacky and wonderful creatures. Among our personal favorites here at FantaSEA are crabs. Although not all crabs are reef safe, they’re so funky that they’re hard to pass up!

Keep reading to find out 5 of our favorite aquarium crabs for beginners.

The green emerald crab has been dubbed the ‘best crab for your aquarium’ by some aquarium enthusiasts and it’s easy to see why. The species makes an excellent addition to your underwater janitor crew: it not only loves munching on leftover foods that your fish might have missed, but it’s also an avid algae eater. Notably, it’s one of the only species that will eat the annoying bubble algae, which most other inverts will turn their nose up at.

Green emerald crabs can be combined with most aquarium inhabitants, unlike some other crabs that might snatch up unsuspecting inverts or even small fish. 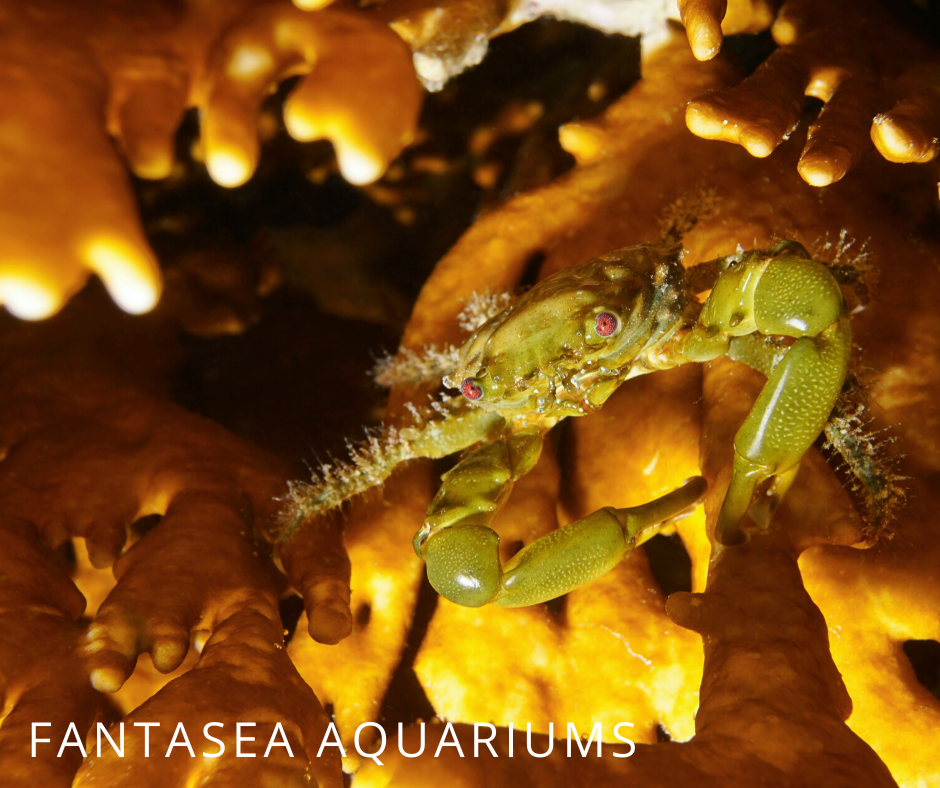 Arrow crabs from the Stenorhynchus genus are easy to recognize from their long, spidery legs and especially the horn-like growth protruding from the head. Also known as spider crabs, they can reach a leg span of about the size of an adult person’s hand, although the females do stay notably smaller.

Although they’re only tentatively reef safe and might prey upon smaller invertebrates like shrimp if they’re hungry, arrow crabs are a fascinating addition to the aquarium. They’re omnivores but will mostly feed on meaty foods. You can supplement their diet with invertebrate tablets, nori sheets and pretty much anything else you can find.

If you’d like to learn more about arrow crabs, you can find a full care guide for this species here. 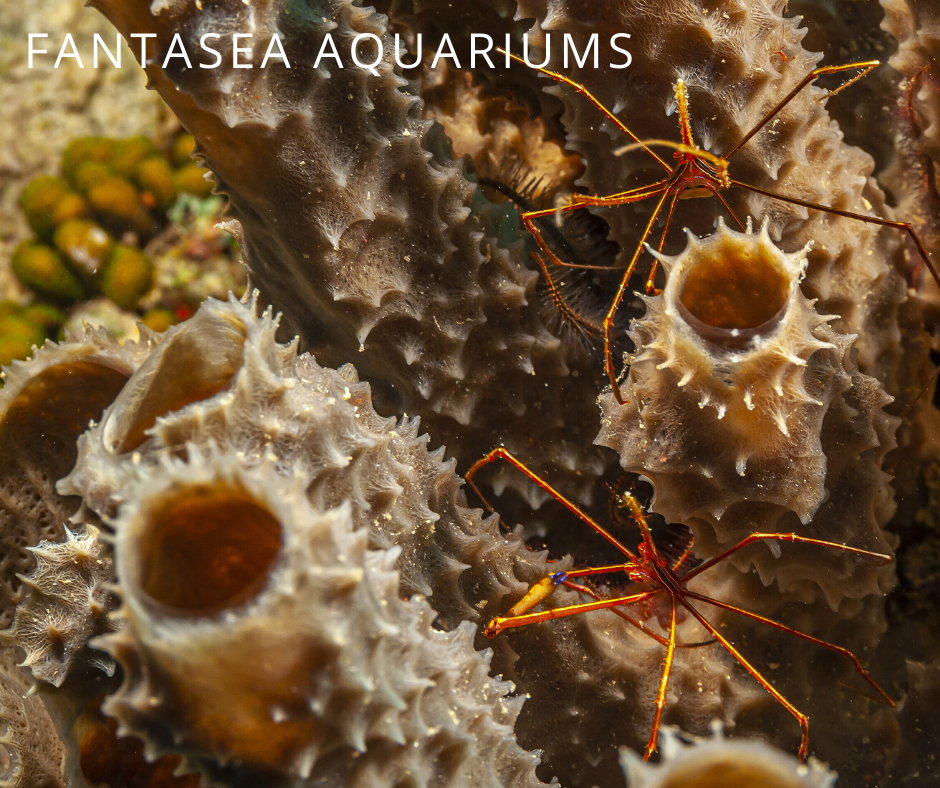 Now this is an unusual creature if there ever was one! The pom pom crab is also known as the boxer crab, two common names it lends from the fact that it tends to carry a small anemone on each claw. These anemones serve multiple functions: the crab can raise them in defense when threatened and it also eats any small food particles that get stuck in the tentacles.

Although the pom pom crab’s anemones do have the ability to sting and might accidentally hit corals, they’re really too small to do any damage. Other aquarium inhabitants won’t be bothered by the crab unless they get a bit too inquisitive. 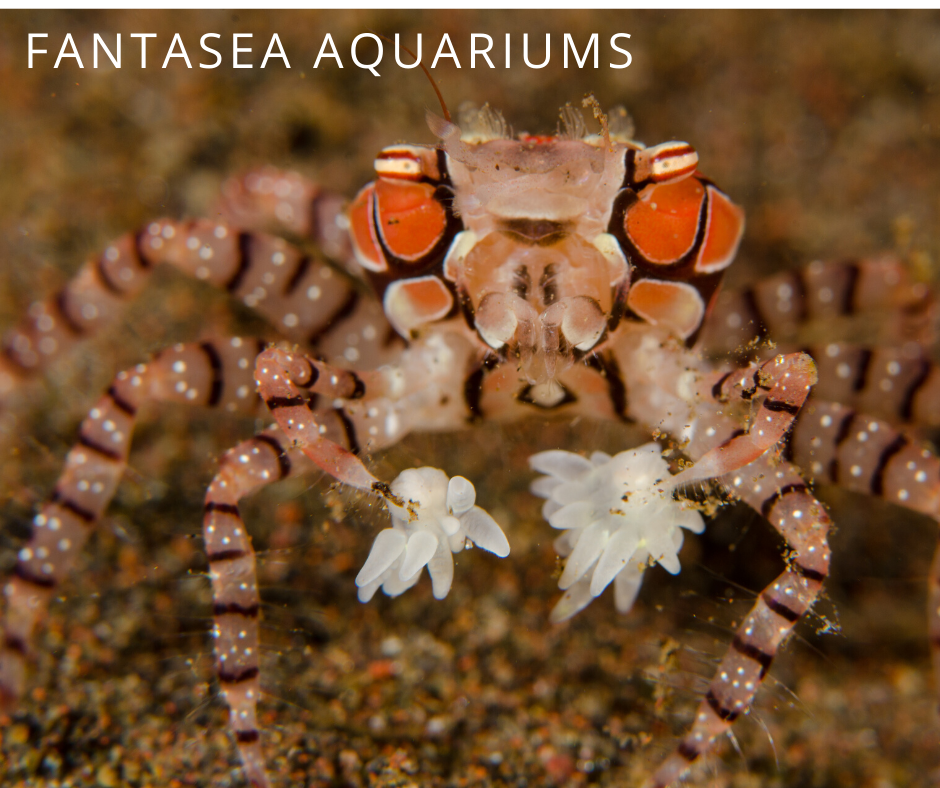 Another species that holds a close relationship with anemones is the porcelain anemone crab. Although this one doesn’t carry the stinging tentacles on its claws, it does lend protection from anemones by using them as a home.

The porcelain anemone crab is among the most docile crabs that can be kept in the aquarium, making it a great choice for peaceful reef tanks. You won’t have to feed this one a lot either: although the occasional algae tablet will be appreciated, it mostly lives off the bits it cleans off its anemone. The advantage for the anemone is, of course, protection. Although this is a very peaceful crab species it’ll still chase away anything that gets too close to its host. 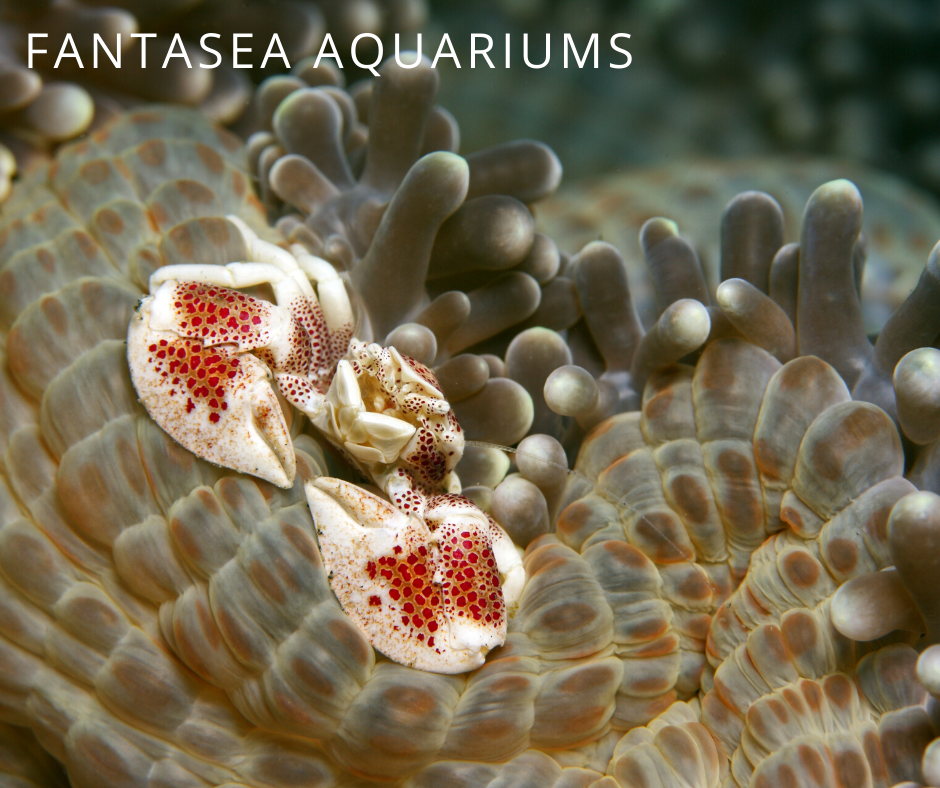 There are many hermit crabs out there that can be kept in the aquarium, with the blue legged hermit crab being one of the most popular smaller species. Appreciated for their appetite for detritus and algae, these hermit crabs make a great addition to your underwater cleaning crew.

Blue legged hermit crabs are peaceful and won’t bother their tankmates, with the exception of snails if they find the amount of shells provided in the aquarium inadequate. A group of these crabs is a fun sight to see due to their clumsy behavior and silly antics! 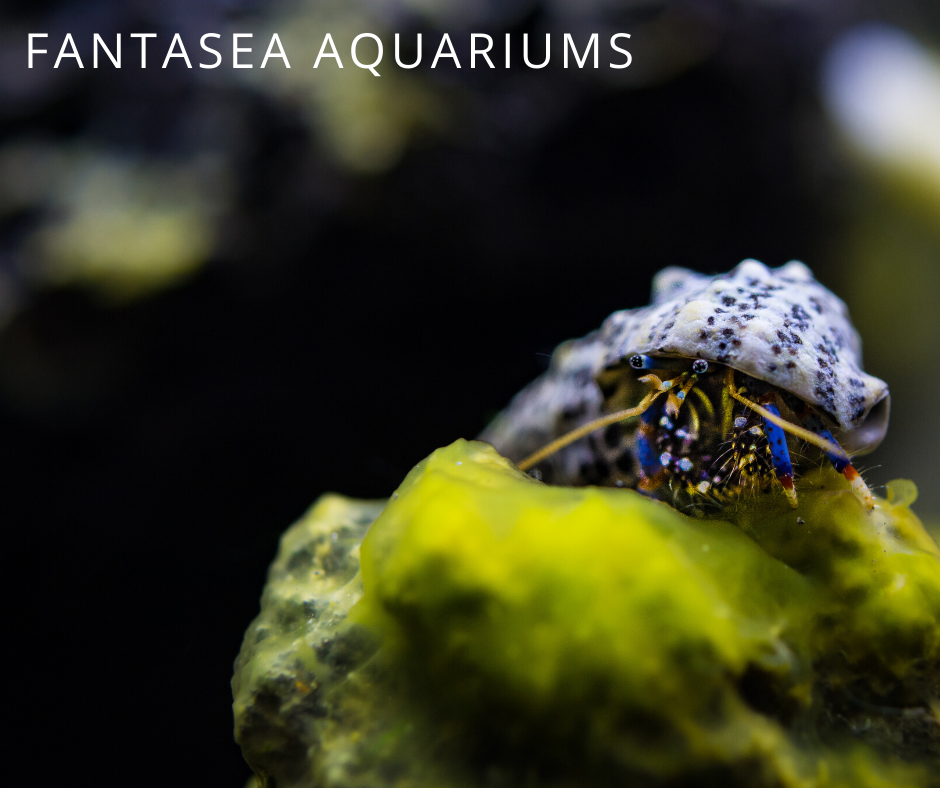 A marine aquarium filled with colorful fish and funky crabs like the ones on this list is an amazing sight to see. If you’re not sure where to start, though, setting one up can be a daunting task.

FantaSEA can help: we design, build and maintain aquariums. Contact us here with your ideas! 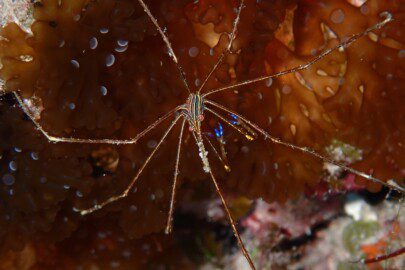 Weirdo alert! If you’re looking for an unusual crustacean addition to your marine aquarium,...
learn more 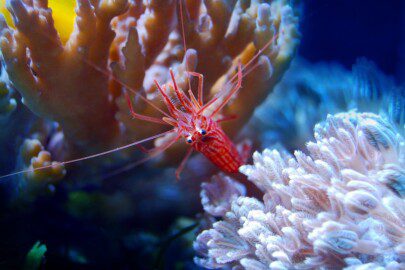 When it comes to planning their aquarium, most people think about what fish and...
learn more